Winter was good for me. I kept myself ticking over averaging around 5/6 hours a week with no particular plan. I spent more time running and felt this was something going really well. Ironman training officially started on the 31st January. I’m now 6 weeks in and the majority of it has gone to plan. The only problem has been dealing with injury and niggles. Swimming and biking have been fine, but like always, it’s the running that causes me issue.

Two running injuries – both of which I have suffered from before, meaning I know how to treat and manage them. It has meant that some of my running volume hasn’t been where it should be. Everything was going well until around 3 weeks ago and having to hobble home from a run. Anyway I am back running again now and managed an hour on Friday and another this week. It wasn’t fast or pretty, but I got through it. It’s frustrating as running had been going really well and I had recently hit a 10K PB.

I think my strength training had really paid off in the winter, but since starting Ironman training this has backed off. I feel if I don’t keep some form of strength training then the injuries and niggles creep back in. This is certainly one of the difficulties in finding more time to fit it in on top of managing all the other training, work and family life.

I must say I have been really consistent with training and followed my plan (Don fink) pretty much as to how it was set. Although it is a 16 week programme, I’ve started it with 20 in mind (pre-thinking injury and holidays booked here) and I think this is ideal.

I’ve also had my first sports massage of the year and thought I’d better start getting these in as I feel they make a real difference to me and my body. I recently had a sweat test at the Triathlon show in which I will blog about separately.

I’m off to Majorca in a few weeks where I will have a break from swimming and complete some great riding and hopefully get a few runs in as well. I love riding there and those will know from my previous post from last year.

Here’s my plan from the last two weeks so you can see some of the volume. You’ll also see where I’ve had to knock back some of the run volume.

This is the Don Fink intermediate programme I am following and I must say it is simple to use and follow. Some of the specified swim workouts have been a little easy, probably as I had quite a good base and volume previously. I swapped some of these and completed a few workouts from the competitive programme.

So overall, I’m fairly happy and I know the run volume will get back to where it was. I can’t fault my swimming and biking and the base period is nearly over. Training volume will continue to increase as will the intensity. Things will get harder! Bring it on!

A few months have passed and life has carried on. Training has been ticking over and ironman training has begun (although not totally how I would have liked). However, this post is not about training or results or injuries. I will post an update on this soon. It is one I promised a while back in regards to my triathlon bike build. Well, I have finally done it! It is built. My work of art is here. I knew it would be a challenge and a rather indulgent expense, but it was a project I felt I could achieve. My mechanical skills and knowledge of bikes and parts I feel is relatively good. I knew I would have to take on things I have never encountered before, although this didn’t worry me and I felt I had the necessary skill to undertake this project.

So the frame was bought at the end of summer with the view of acquiring most of the parts and putting it together over the winter. I imported my frame from America as I had got an incredible deal which saved me quite a bit of money and that was even with import duties on top. I was going to list the costs of all individual parts – although – I just can’t be bothered to look through all my emails and receipts!

So I had done a bit of reading around bike building and knew that I had to start with getting the headset in along with the brakes and Di2 wiring. I was building this in my loft conversion and didn’t bother with my work stand to begin with. The frame is incredibly light – so light that you could literally hold it with your little finger.

The headset took no time at all, but the brakes were a little more tricky. I had never used direct mount brakes and didn’t realise the housing they are set in is important when installing them. A lesson learned already as I had to fiddle putting it back together before installing them. I got there eventually however! 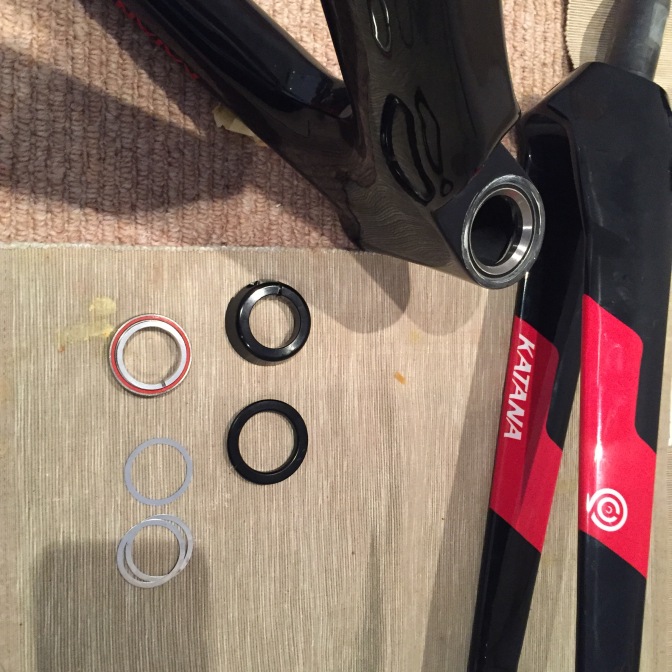 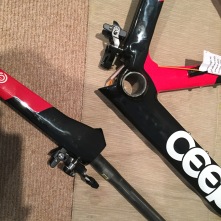 I then began to tackle the Di2 cabling. When I bought this frame I decided that I wanted electronic shifting and was going to go for as high spec as possible across the bike. I have had experience of internal cabling before as I have this on my road bike so didn’t have too much trouble installing the wiring. I followed a few wiring diagrams on the internet I came across and it is important to use the piping  (orange in picture) to tape your cables to and thread through the frame. 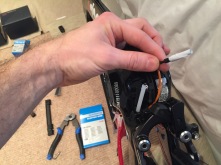 Once the wiring was installed, I then had to put together the internal battery and all the junction boxes. 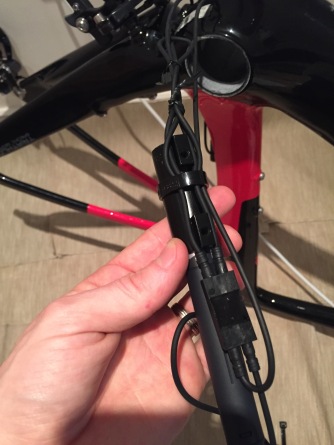 The bloody circlip was a bugger to put into the battery housing without a circlip pliers but I managed to force it in with a screwdriver and long nose pliers. I tidied the battery and all the wiring up with a few cable ties as seen above. 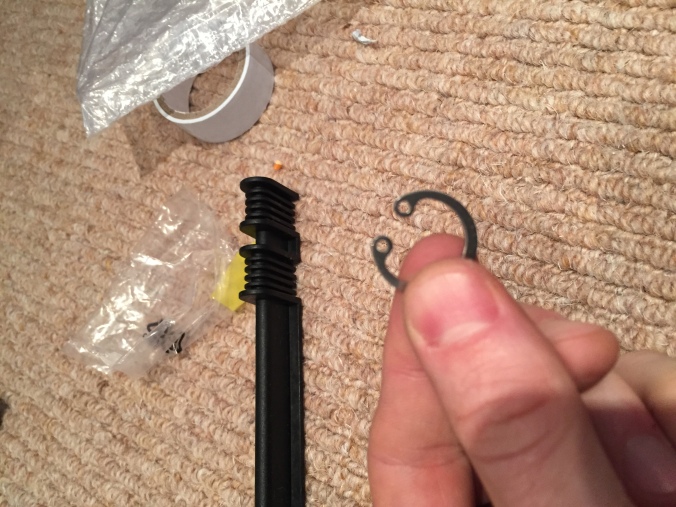 The bike was ready for the derailleurs to be attached. This was a fairly simple job to do. I would adjust these later once the cranks were installed.

I wired everything up and charged the battery for a bit while I took a rest. Believe it or not, I’d been going for around 3 hours. As you can imagine, I was taking my time a little as to not mess anything up!

Next up was the BB (Bottom Bracket) installation. My BB was an EVO386, which after much research, meant me buying  a rotor brand but also a specialist BB installation tool.

The pic on the right shows the various sizes of BB it installs and I used the 24mm bushing.

You have to be fairly careful when doing this as the BB install has to be exactly straight and flush with the frame, otherwise you run the risk of causing the BB to creak and weaken over time. I sweated a little doing this bit, but slowly and doing one side at a time it was done. It’s also important to use anti-ceasing formula here also.

I began the next session by installing the crank which took a bit of force getting in but I got there in the end. When I installed the front derailleur I purposefully left it high so as to clear the crank but also adjust later on. 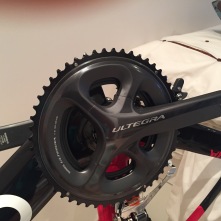 I had been looking out for a set of second hand shifters so I could run shifting both at the brake and at the tri-bar ends. It took a bit of patience and eventually eBay came through and I got a decent deal on some. They bar end shifters retail for around £120 so an £80 deal on eBay for these and then a pair of Di2 brake shifters for £185 when these go for over £240. I was pleased I was patient in getting these. 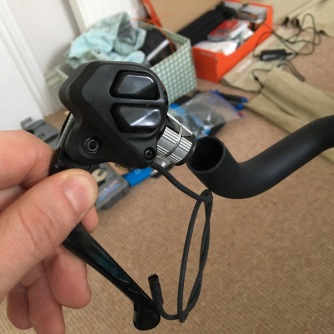 That wasn’t the only steal I happen to come across. I also managed to get a pair of carbon profile design tri bars. I spent some time installing the bars and shifters. Again there were some fiddly bits to do but my bars had internal cable routing. The trickiest part was getting the brake cables just right and all the connections to the junction box along with making everything tidy.

I did have some problems getting the brakes to work before realising I needed to add the cable ferule to stop the cabling going through the bar holes. This kept happening every time I pressed the brake and it took me a while to work out what was going on. You start questioning whether things are installed accurately, but once I figured it out, all was finally well. 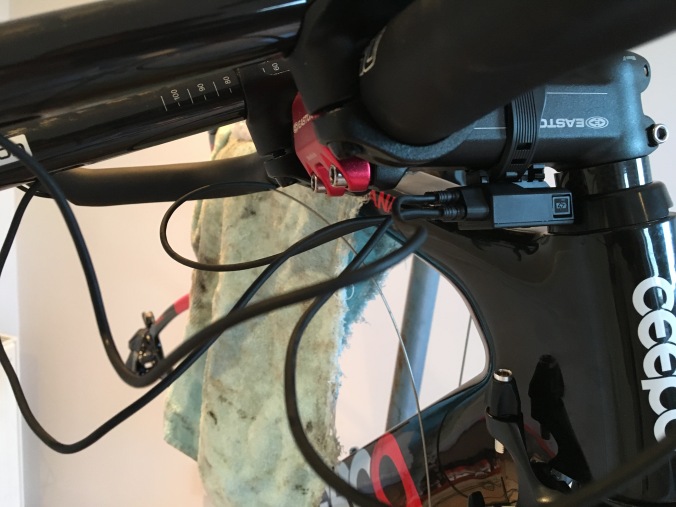 I spent quite a bit of time sorting all the cabling and messing about with the internal routing ensuring there was enough cable for when the derailleurs moved and thus tightening everything.

So I purchased a budget pair of training wheels. These are not the final race wheel and hopefully I will purchase these in April. I’m still a little undecided about what to go for. I installed the 11 speed cassette and then added the chain. I followed the park tool measuring guide to get it the right length before breaking and adding a power link for future maintenance.

I was then able to adjust the rear and front derailleurs, which on Di2 is surprisingly easy compared to a mechanical setup. So this was how the bike was looking like…

I couldn’t do anymore until the saddle (Adamo prologue) would arrive, which again was another steal on eBay. I needed to cut the steerer tube to install the headset fully as well and wrap the bar ends with tape. It would then be pretty much done. That was the plan for the final build session and to add some pedals. For now I will use some old ones until I buy some. I also needed to do a DIY bike fit before any cutting takes place so that it is the correct height. I think I will add a few spacers to the stem area in order to cut it higher then needed. That way I can adjust and lower it later if needed.

So I ordered a saddle and got a Speedfill hydration system through another steal on eBay and have since added these. I’ve also wrapped the bars but I have not yet altered the stem and will do this when I get the time. The bike is pretty much done and I also tuned all the gears and the Di2 is now working perfectly. The only thing I need to get now are my race wheels. There isn’t a rush on these and I have my eye of some FLO wheels. When race day comes round I will post a pic of the final version of the bike.

So how much did it cost?

Good question. I know by building it myself I have saved a fair amount, but it does take some time in searching out deals and winning eBay bids. The bike (once I have wheels) would cost around £3500 which is way less then the £5500 quoted for the setup I wanted.

A very rewarding experience and certainly not the cheapest, but far cheaper then any quotes I had. Plus I got everything I wanted and the satisfaction of doing it myself. 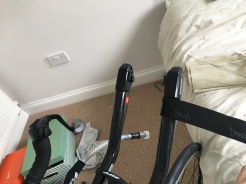