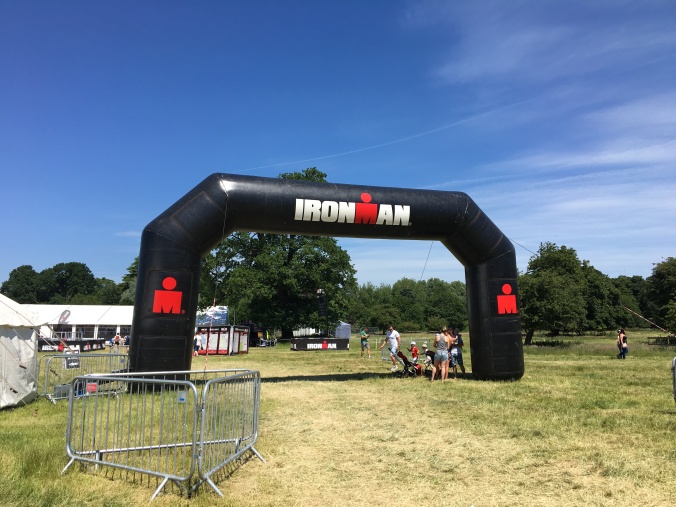 Finally it had arrived – my A race. The first ever Ironman branded event I would complete, and the one I had planned so much around and trained for this year. Before I begin, I warn you now, it is a long blog post. I thought I’d better do it justice. My condition for swim and bike is something I certainly can’t argue with, however as you all probably know, my run fitness has taken a nose dive due to injury. I approached this race with a slightly different mindset to the previous few, where I had hoped going into each one something miraculous would happen and my knee would be magically healed. With this race, I didn’t go in thinking this. I knew I’d struggle on the run with pain, and shuffle my way through, so Danny, control the things you can and don’t worry about those you can’t! That was the new mindset and do you know what? Low and behold, I was in for a nice surprise (more of this later).

I spent the Friday evening packing and carrying out a few bike adjustments. The front brake need adjustment as the cable wasn’t sitting quite right through the bars. I wanted it sorted before flying down some of those descents! I’m glad I did it now. I also corrected the hydration unit tubing by cutting it and adjusting the hose length. Both issues I noticed and encountered during the Outlaw event.

We travelled up to Staffordshire on Saturday morning, and went straight to the city centre to pick up parking tickets. The next stop involved a jaunt onto Shugborough estate where the run would take place and the race finished. It is a beautiful setting for a race, but bloody hell Ironman, the logistics and organisation with split transitions, which are miles apart, are something new to me that I can’t say I enjoy.

I spent an evening mid-week trying to work it all out. It was planned and went something like this:

It felt like I’d done an ironman before the ironman! In all honesty, the logistics were a nightmare and the organisation of it is slightly ridiculous if you ask me. I don’t mind about the split transition, which is common in Ironman events, but the lack of parking at the venues is no help whatsoever. It just makes everything a pain. Anyway, everything was mainly completed to the plan above except I didn’t attend the mandatory race briefing. I was too late and no doubt that they just regurgitate what is in the guide. The problem with these split transitions is that you are always wondering if you left everything you need at each place. I mean, I rack my run bag with my trainers and visor, so what has the guy with the bag next to me got in his that is so bloody huge! We made our way to T2 and racked the bike as planned. Isabel (my daughter) had fallen asleep so I went off to do this whilst Kate (my wife) waited with her.

Our hotel was around 15 mins away in the car and I had the idea to book a cab/taxi for the morning to get me to the event without the wife and daughter having to be dragged out with me. My race was starting at 7:30am and wanted to get into T1 at the swim start to get finally organised and add some last minute gels, food and drinks to the bike. This meant a 4:30am wake up and 5:15am out the door. A nice relaxing evening meal in the hotel trying to get as much fluid down my neck as possible so I was fully hydrated. I also got my white bag ready with my swim gear in that i would leave my clothes I was wearing in for Ironman to transport to Shugborough.

Up and ready as planned with he trusty porridge for breakfast. My cab picked me up at the time arranged meaning I arrived at Chasewater with plenty of time to spare. I hate rushing for these things and find a bit of extra time to relax and prepare is good for me. What I really like about these events is the opportunity to mingle with the pro athletes. They are there with you in transition and most are really friendly, especially Lucy Gossage, who went on to win it for the third year in a row. It’s great to be able to check out their gear and set up. I didn’t have my phone with me and unfortunately missed a few opportunities for photos.

The swim was pretty uneventful to be honest. I really like the idea of rolling starts, where they set you off in 3s and 4s roughly 10 or 20 seconds apart, meaning you are not all fighting each other for clear water. It wasn’t my fastest swim ever, but I kept a little back considering the boiling day ahead of me. In and out for 36:55.

I did consider using the road bike for this event with just under 2600ft of climbing, but eventually decided with the new steed. Climbing is certainly harder and slower on the tri bike with bigger gearing! I flew around the first 15 miles averaging 18.5mph and didn’t feel too hot. I also knew that the course would become a little tougher. The hydration system was working beautifully as well since the adjustments. I realised I was going through an incredible amount of fluid and used every feed station to top up with water. I had loaded before the race with 1.5L in my bike unit containing 3000mg of sodium. I also had salt pills with me and an extra sachet. This I lost as it came out of the pouch on the bike, but the pills came into use then. Did they work? Well I didn’t suffer one cramp in the entire race and felt fully hydrated throughout. You may remember my visit to the sweat experts earlier in the year, which I believed has now paid off as I stuck to the hydration plan.

One thing I did notice on the bike was the heat. Eventually it got to me. I certainly slowed down finishing with an overall average of 17.2mph. It also became a little more lumpy, and at around 45 miles in, the worst of those hills was savoured. I arrived in transition after 3hours and 16mins on the bike.

The bit I was least looking forward to. I think you all know why. It went like this – 1km, no pain, 2km – no pain, 3km – no pain and so on. No bloody knee issues whatsoever apart from a little stiffness. If anyone suffers from ITB, I have the routine to get you back from injury. I’ve suffered it twice and followed the same routine to great effect. Much quicker back from injury this time as I knew what I was dealing with and how to deal with it. The rehab has certainly paid off, but unfortunately I had lost so much run fitness. Along with this was the stifling heat (30c) and a few longish hills to run up.

The crowd support was fantastic throughout. They really got behind you. I wouldn’t say three loops whizzed by, although the crowd certainly helped me along. Some amazing residents had their hose pipe sprays going constantly. I cannot explain how difficult the heat was, but every opportunity for water was taken. I walked through every feed station chucking a cup down my neck and then one over my head. Each loop of the run was faced by the hill – I only ran up it once. I have never walked in the running part of a triathlon or when running a half marathon, however the heat and lack of run fitness broke me. Mentally it was the toughest race or anything physically I have done. I like to think that I can suffer pretty well and grind things out when they are hard, but not then. The end goal was to finish and I wasn’t going for a time so I did just that. My slowest ever half marathon – a whopping 2hrs and 23mins! A total time of 6 hr and 29mins. Do I care about the time? Hell no! Not in that heat. I honestly know I can go a lot faster (my Outlaw was 6:10 and the injury was at its strongest then), certainly sub 5 hrs, but this will be a goal for next year now as I do not have anymore half iron events planned for the remainder of the year. 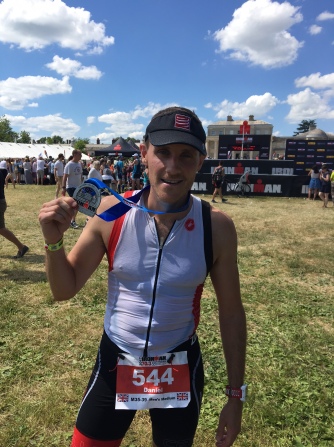 This was the last time Ironman were holding this event at Shugborough, so it is not possible to do this exact same event again. It is too early to plan next season just yet. I know my wife wasn’t too pleased with the logistics as well as the spectating on the day. It took her ages to get into the grounds because of the road closures, and the fact no-one could tell her how to get in was so frustrating. Every marshall was clueless – and no fault of their own, but Ironman. What was a shame was that these poor people had not been informed and considering the amount of money Ironman charge and make, more effort into this side of things could have been made.

Isabel enjoyed the medal…and a croissant!

As we had the day off from work to travel back on Monday, we had a good day at an adventure park on the way home as well. I was as stiff as a board but managed to clamber about with Isabel for a bit – although very slowly! 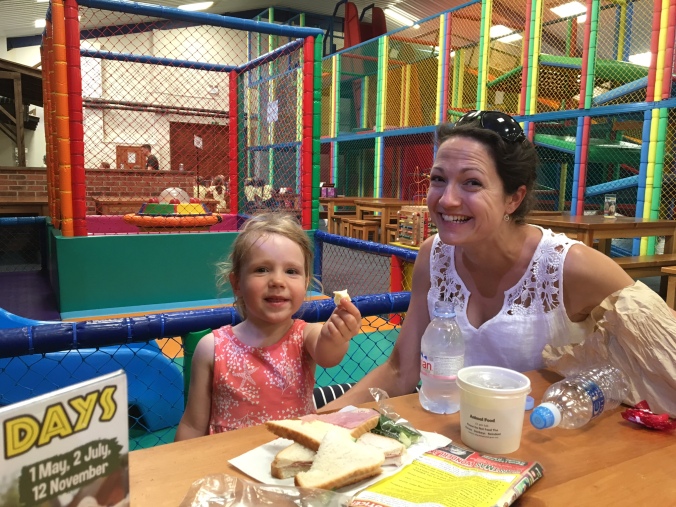 Next up you wonder? Well the Eton swim next weekend, followed by the Great Newham swim and run the weekend after. Plus I will keep going with my injury rehab and start running again at the end of this week. The build up again begins to get some sort of run fitness back before the London Triathlon towards the end of July.

Happy reading guys and I’d appreciate if you hit the like buttons.

Had another hit out yesterday over in Dorney. Overall pleased with my race considering the last two niggly weeks. New video now up and link in bio. Go check it out! #triathlon #bananatriathlon #triathlete
@outlawtriathlon half done! Great day out and always will be one of my favourite events. Now time for some rest and recovery including a beer!!! Well done to everyone competing today. #outlawhalf #outlawhalfnottingham #outlawtriathlon