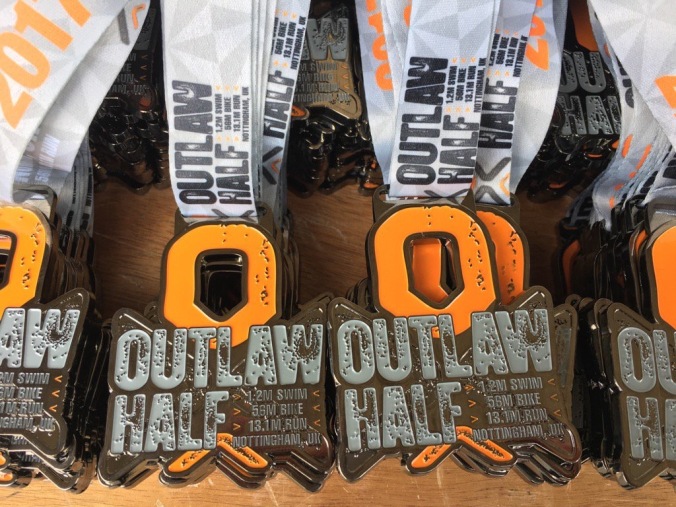 Booked last August as a back up to Ironman Staffs incase I didn’t get in, months of training for this (my B race) and eventually it had come around. I have finally made my debut at the middle distance and most importantly, completed it.

The Outlaw has a great reputation and won numerous awards for being a great event that is well organised. It didn’t disappoint. I arrived in Nottingham the day before around 1:00pm and picked up my registration bits and pieces and also attended the race briefing. This was certainly worth doing as there were a few questions I had beforehand that needed answering!

The weather on Saturday was biblical to say the least. Heavy showers all day, but the forecast for Sunday was dry and warmer by midday. In-fact, for once the weather forecasters had it spot on. All the rain had made the ground around the hosting venue (National Watersports Centre) quite boggy and as some of the run was along gravel paths, these were a little muddy in places. Once i had everything I made my way to my hotel and got my kit ready.

I stayed in a hotel in Nottingham City Centre (St James Hotel) although this time on my own. It was unfair dragging the Mrs and daughter to this one as the 3:00am wake up was a little too much. My wave started at 6:15, so overall a fairly early start to say the least. A early night with dinner in the hotel and a small treat… 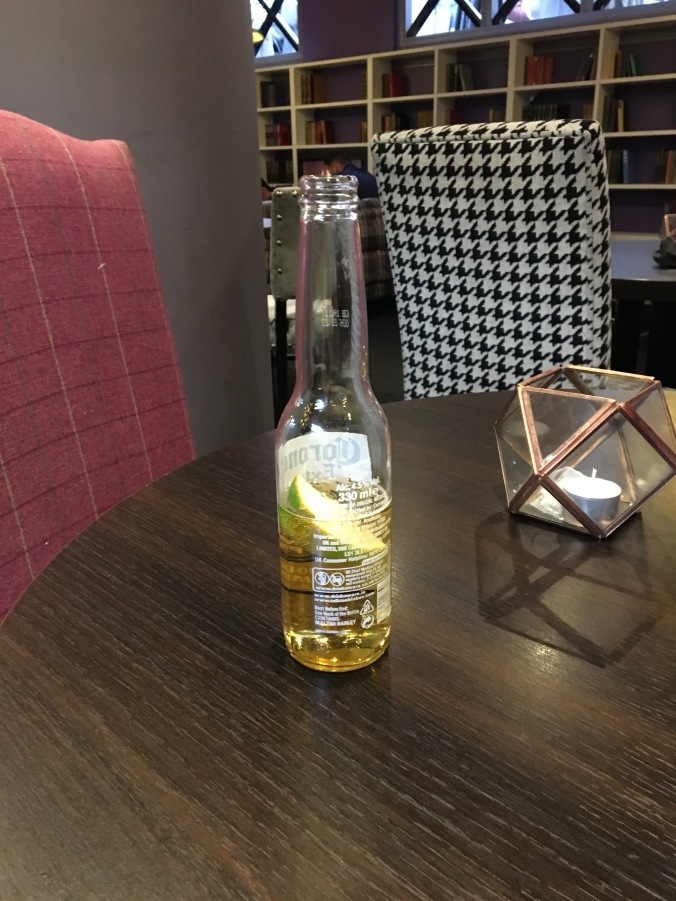 When I arrived at the venue, it was chilly to begin with, but the sun was certainly rising.

At the previous day’s race briefing, they warned of the sun rising on the horizon into which we would be swimming and to use tinted glasses. This is my first rookie mistake – I hadn’t brought mine. It made the swim incredibly difficult to navigate although it meant me following and checking on other competitors as a guide. Not ideal, but it worked. Once I found some open water I was able to get into my stroke and swam really well. I was done and dusted for 1.2 miles within 35 mins, and when I hit transition it was pleasing to see so many bikes there. I knew I had a good swim. Some of you may remember in the last post that I had made predictions about each discipline of my race and my swim time was more or less bang on. 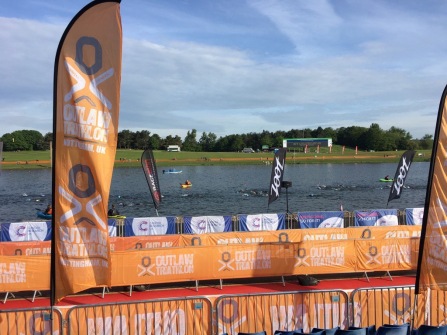 Out onto the bike and I felt good. My avg speed for the first 1/2 hour was 19mph and was hoping to keep between 17-18mph for the whole bike section. I believe I would have done this if I didn’t have to stop three times!!! All simply because my hydration system wouldn’t work. It wouldn’t allow me to suck fluid up. I worked out the the tube angle has to be in a correct position, albeit a little too late as this was near the end. It cost me a lot of time. The other small issue I faced was with my Di2 shifter coming loose on the tri-bars. The roads, in my opinion, were awful. Surface was pretty poor and the only downside of the race for me. So all the juddering and shaking made my shifter come loose. Luckily I noticed and fixed it whilst on the third stop.

There were a few more rookie mistakes here also. I should have worked out why the hydration system does this as it did happen on a training ride a week or so back. In hindsight, I would have set it up properly. Another mistake was not drinking enough, but again due to hydration system. I should have stopped and fixed sooner as I ploughed on for 10 miles with no drink before doing it for the third time. I also popped a salt tab here as well to get a lot into the system quite quickly,

There will be changes I make to my nutrition and hydration plan in future events. I didn’t open any food prior to the race and did this all on the bike. Wrong move! It takes too long doing it and you lose a lot of speed and time. Next time I will plan to possibly break it up and have it in small bitesize chunks ready to just pop into the mouth.

This part of the race was the bit I feared the most. Not because I can’t do it, but because of the injury issue going on with my knee. Anyway – it was there and stabbing me on an off for 15k! I’m not sure what happened after that as for the last 6km it didn’t give me much trouble at all. It was almost as if it had said, ‘Well sod you then if you are not going to stop.’ I felt good for the first 10km of the race although a little held back due to the injury. To be honest I just wanted to be able to run and get through it. The second half was a  slog, and warm too. A little sunburnt towards the end also. I did it though and I can now say I have a middle distance event under my belt.

I apologise for the lack of photos for this blog post. That’s usually the wife’s job, so as she wasn’t with me there aren’t many I’m afraid.

Anyway i hope you enjoy the read…a little rushed with the write as I’m so tired and now going to bed.

Finish time I hear you say?….6hr 10 mins. One thing I do know now…I think barring injury and bike issues, sub 6 hours is easily on the cards.